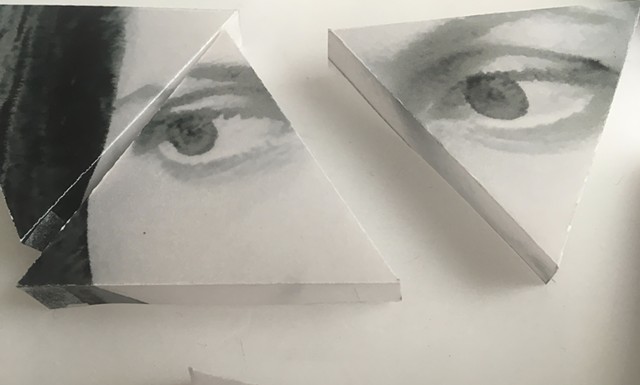 Life experiences and observation of nature are the main sources of my ideas. My artwork is mostly non-representative, exploring concepts of time, perception, form and balance, mainly through the physical movement of the artwork itself in a ludic and game-like context, such as puzzles.

I see nature as unity that can be perceived as a set of elements that connect and interact in a permanent transformation and growth, as well as the perception of reality seems to be made up of different parts, such as: beliefs, memories, life events, and when memory fades, or we learn something new, or events occur, for example, the perception of reality can change. I imitate these dynamics by creating an open-ended image, made partly of controlled arrangements and partly accidental. The positive image of the artwork are groupings of repeated figures made of paper, some molded into three-dimensional shapes and assembled within translucent paper boxes or a kind of envelopes. The patterns in the artwork are not fixed, allowing movement to create unpredictable compositions. Harmonies and tensions arise from the various exchanges between colors, positive and negative spaces, geometric and organic shapes. Evoking the unpredictable patterns of nature, as well as the impermanence of beliefs and memories.

When you see the artwork, you look at it for the first time, every time, because what creates and completes them always changes, like light and forms that merge and interact, making dynamic and unpredictable relationships Norma Márquez Orozco